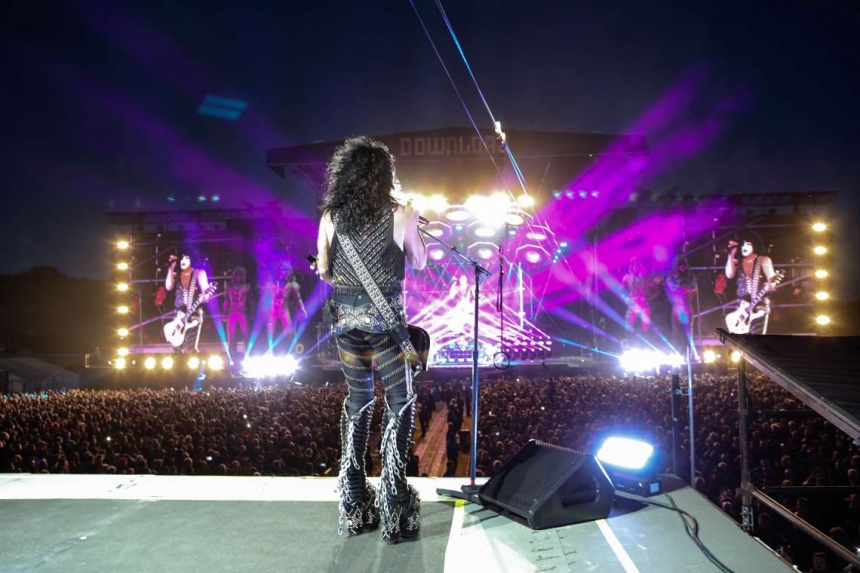 Serious Stages returned to Donington Park, supplying stages and site structures for a weekend of rock at Download Festival, with an unusual customisation of our mainstage Front-of-House tower, to accommodate a special performance by headliners Kiss.

The 25m TZ main stage roof, flanked by goalposts carrying giant LED screens, Download Totem branding and PA speakers was adapted each day to suit the production and performance requirements of headliners Iron Maiden, Biffy Clyro and Kiss. Most large festivals require overnight changes to the rigging and front-of-stage platforms, but Kiss came with an additional request -to install a rig for Paul Stanley to fly 50 metres from the main stage to the Front-Of-House (FOH) tower, where he could land and perform two numbers, before flying back to re-join the rest of Kiss on the main stage.

A hand-operated winch was anchored in the centre of the 2nd storey of the FOH tower. It sat behind an extension to the lower floor, creating a performance stage at the front of the structure, with a gripped surface to ensure a safe landing for the rocker. The spectacular gag saw him fly across the heads of the audiences, with guitar slung over his shoulder, and back again, with the other end of the flying wire rigged within the main-stage.

“We were very attentive around the engineering for the flying rig, with safety of paramount importance when flying a star over the audience. The calculations for the anchoring and tension of the wire were all key elements in achieving a successful stunt and our team on site were spot on installing it and turning our technical mixer tower into a performance stage!”

Eugene De-Lange, Serious crew chief, installed the system and made sure the bespoke design met the expectations of the band’s management. In addition to the permanent design changes to the tower’s design, the crew had to remove the safety hand rails immediately prior to Kiss’s show, to create the open fronted performance stage. For Eugene and the crew, the build began three weeks ahead of the five-day festival and completed the de-rig within the week after show.

We also supplied a 22m Supernova system, as the second ‘Opus’ stage, featuring Frank Carter & The Rattlesnakes, Steel Panther and Megadeath, along with the tented third and fourth stages, with 25m stage decks accommodating built in scaffolder towers for PA hangs, front of house towers and assisted viewing platforms and speaker delay towers surrounding the arena.