Lionel Richie plays ‘All the Hits’ on Serious...

Lionel Richie plays ‘All the Hits’ on Serious Stages 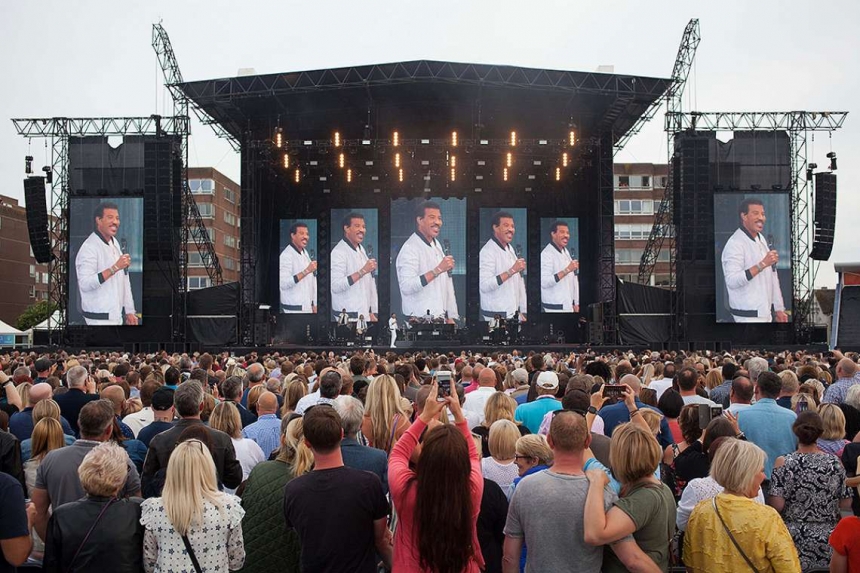 Serious Stages supplied three 20m TZ Tower stages to the Lionel Richie ‘All The Hits’ UK tour across nine dates in June.
Lionel Richie brought his biggest hits to outdoor venues in nine cities across the United Kingdom. Serious’s Tim Norman project managed the stage logistics for the tours into football and cricket stadia, along with a core production team including Jeremy Mosdell, Andrew Ridler, Nathan Kemp and Devan Bezuidenhout.
The touring stages, measuring 20m, were smaller versions of Serious’s standard 25m TZ roof with narrower PA wings. Specific adaptations were made to compress the standard configurations of the system to fit the client’s specifications and needs. With six cross stage trusses the stages were well within the 48ton capacity, with lighting and five portrait screens. Two 7m wide goal-posts flanked the stage carrying further portrait screens and flying the pa from a swan’s neck and out-rig.
Front of house structures included a spot tower, controlled platforms and camera platforms. Additionally, extensive AVP platforms were present in six of the cities to ensure that sufficient facilities were available for all concert-goers.
Tim Norman highlighted the challenges facing his team, particularly regarding the limited accessibility to some of the stadia, he also spoke highly of his relationship with promoter, Marshall Arts:
“It’s now our seventh season of doing tours with Marshall Arts, which is really lovely because we all know each other really well, so there’s an element of trust and understanding there and a team ethos to help each other achieve great shows.
“Anna (Parry) has taken over as their production manager and she is fabulous, she’s calm under pressure  . . . and there is always pressure at events, she’s also very resolute in getting things done and bringing order.”
Share:
← Back to Latest News