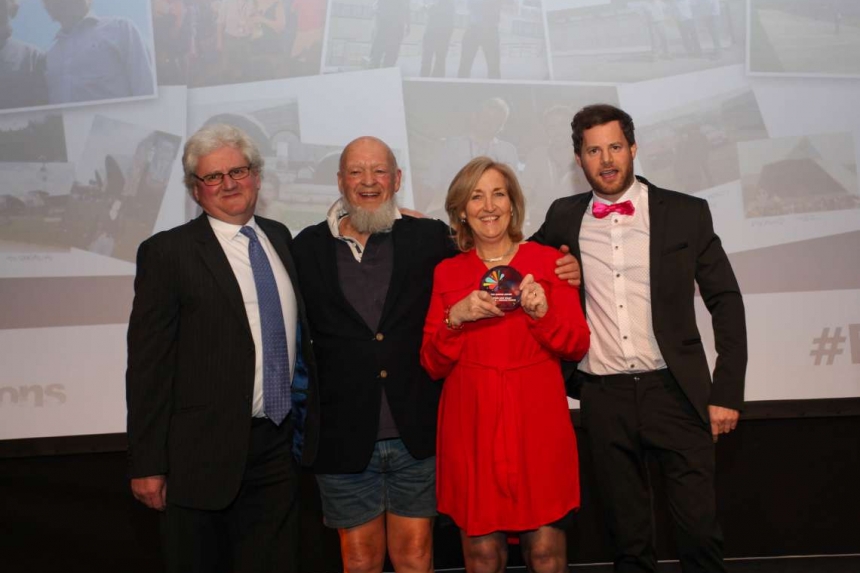 Glastonbury Festival’s Michael Eavis presented Steven and Holly Corfield the prestigious Industry Legend Award, with the company’s Max Corfield and Simon Fursman also collecting the Best Staging Award at the 2019 Event Production Awards, London, March 14th 2019.
Over 500 event professionals, many of whom have worked with Serious across its 35 year history, were enthusiastic in their applause for Steven and Holly receiving The Legend Award from long-term friend and client Michael Eavis at the Event Production Awards. Opening proceedings at the awards evening Michael gave a heartfelt speech, commenting:
“Having been a neighbour of Steven and Holly’s 45 years ago, I used to regularly bail them out on the farm. Then when I started Glastonbury, Steven helped me build the first wooden Pyramid stage and I gave him his first paid staging job! Since then, Serious has continued to supply stages to Glastonbury – and I am delighted to report that they are far better at staging than they were at farming!
“It is an incredible feat for them both to have grown and maintained such a fabulously successful family business and I am very proud to know them and be here to recognise this achievement.”
Later in the evening, when 22 specialist event category awards were given out, Serious Stages was announced the Best Staging Company, with a comment from the judges that:
“They are making interesting developments in stages, stage roofs and other stage associated structures. They are also developing temporary buildings – but their core business is stages for concerts and festivals and this entry just had the edge.”
A delighted Steven and Holly were humble in receipt of the double win, with Steven stating:
“To receive this award in front of so many friends and colleagues is a real honour. For over three decades we have strived to help our clients’ produce incredible shows from festivals to the London 2012 Olympics to Ryder cups and constructing temporary buildings for film studios. This award reflects their faith in us and the hard work of so many staff.”
Holly adds:
“This is truly surprising and we are here collecting these awards thanks to all of the support we have received from fantastic clients, family, friends and of course, talented staff. We have 35 years of heritage but are still focussed on being industry innovators and the Best Staging award is indicative the Max, Simon and all our staff are very much at the cutting edge of creative engineering and looking forward to another busy summer.”
Share:
← Back to Latest News