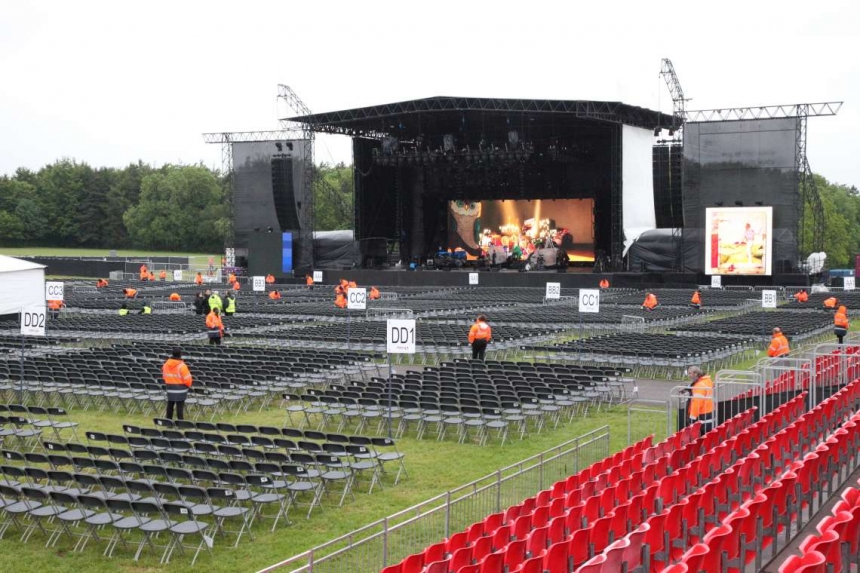 We have been entrusted to supply Elton John’s latest tour, which kicked off at the Kent County Showground on 31st May 2015.

We've hit the road with two of their systems to provide the staging for the outdoor venues of Elton John’s summer tour, which sees him perform iconic hits from his five-decade career. The first show saw our team design and build an 80ft wide flat roofed stage in the middle of Kent Country Showground, complete with a huge 8m cantilever, a 6m x 6m front of house and downstage truss spots.

Kent showground is a flat location with no existing seating or infrastructure, and the addition of this impressive cantilever was created to ensure great site lines throughout the entire audience. This allowed seating to be built as close as possible to the stage, to give the show a close and personal feel for both the audience and Sir Elton.

Our project manager, Tim Norman said: “This is the third year that we’ve worked with Elton John and he’s well known for performing in new venues away from the usual touring circuit. Serious Stages have toured with some of the biggest names in music and are well used to building staging in unusual locations. With this comes the assurance that we have the experience to overcome the inevitable logistical challenges that a venue like this may throw at us.

“Creating the cantilever is the key to taking a show of this size into these smaller stadiums. It not only allows great views from all angles, but it also enables a greater audience capacity which is a key economic driver. With a short time-frame between shows, we need to de-rig in one day, despite the rain, so we can transport it to the next venue and begin the build process.”

Kent was the first of six shows that we will be supplying; others include Eirias Stadium in Colwyn Bay, Kingsholm Stadium in Gloucester, Banks Stadium in Walsall, Westmorland Country Showground near Kendal, and the AECC Aberdeen.